You will have noticed that syncing up to a blockchain that has been running for millions of blocks can take quite some time. Luckily Syncing up can be expedited by using an existing valid snapshot of the chain state database.

In this Article you will learn how to make use of snapshots as well as how to create them yourself.

How to use WAX Snapshots

A valid snapshot can be used to sync a WAX nodeos process up to a desired block on launch by using a snapshot file to recreate a valid chain state database.

This alleviates the need to build the state database one block at a time from block #1, which takes time to catch up to the chain head block which can be in the millions or more.

The chain state database shared_memory.bin is needed by nodeos to run, it is a memory mapped file that contains the state associated with each block, including smart contract data, account details and deferred transactions.

There is however a caveat. Depending on the function you require of your node, for instance running it as a P2P seed node or fully functional API node you will also require the associated complete blocks.log from block #1 to be able to provide the “full” chain.

It should also be mentioned that the now depreciated V1 History functionality is not preserved in a snapshot and will required a full replay.

It is possible to run nodeos without any blocks.log with a current snapshot file but this node wouldn’t be considered “full” and would typically only be used to query current chain info and push actions.

Ideally snapshots should be used with an associated blocks.log containing a higher head block number. So lower block in snapshot. higher block in blocks.log when you start nodeos.

Common Scenario The most common use for a snapshot is recovering from an incorrectly stopped node.. power failure, out of memory, process killed etc.

nodeos needs to be gracefully exited otherwise the state database may be corrupted showing this nasty error:

First of all you need to obtain a valid snapshot file from a trusted source. There are quite a few WAX snapshot services being provided by the WAX Guilds including EOSphere, however not all provide testnet snapshots.. so you may need to look around a bit.

The EOS Nation bp.json Validator has a very handy snapshot service list collated from what the Guilds have advertised. 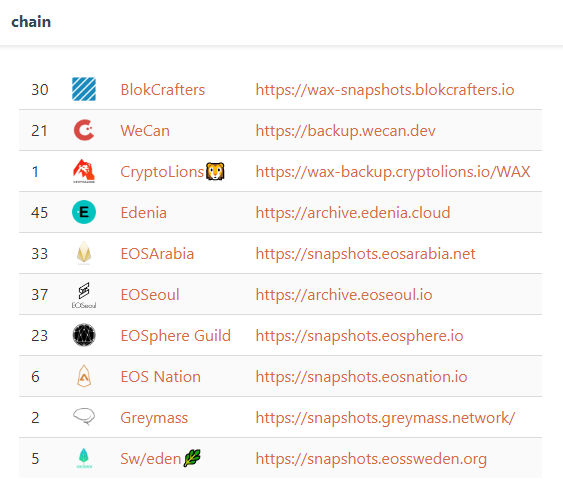 Using the example nodeos build in the previous WAX Technical How To, all relevant files are located in ~/waxdata.

Delete the existing (if any) state database and blocks reversible:

Launch nodeos from the downloaded snapshot (noting that the genesis.json is not specified):

nodeos will now start from a snapshot and attempt to sync to the active chain from the head block captured in the used snapshot file. The blocks.log will also be continued from the snapshot block number, that is why it is important to ensure a lower block in the snapshot. higher block in blocks.log to avoid gaps.

The most security conscious way of using snapshots is to create and use your own. Perhaps even provide a snapshot file hosting service for the rest of the WAX ecosystem to make use of.

nodoes requires a producer api plugin configured to enable snapshot generation. Add the following to the end of your config.ini:

Warning: Exposing the producer_api_plugin publicly is a security risk and can be exploited, the node used for creating a snapshot should not be publicly queriable.

Generate a snapshot locally using the following syntax, the snapshot file will by default be saved to the snapshots folder: